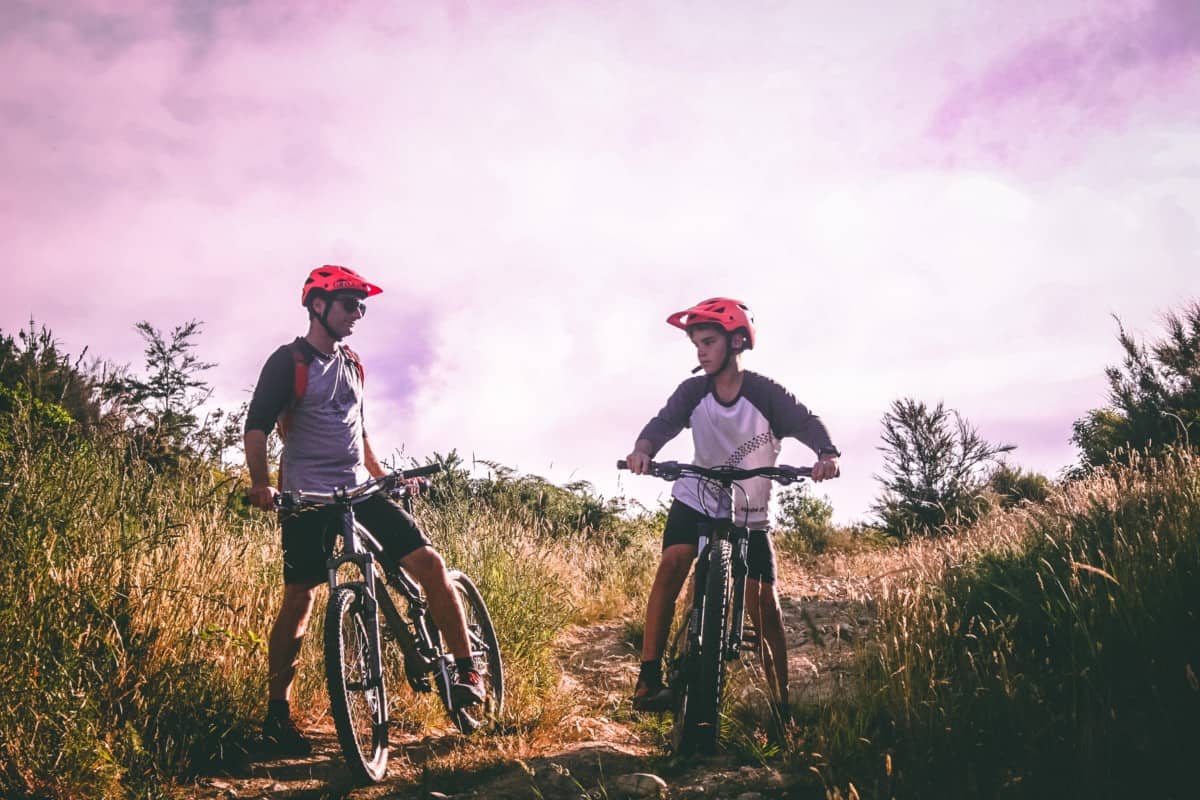 If you are new to mountain biking you might be confused by some of the terminology. Especially if you are in the market to purchase a new bike. In this post we’ll explain the difference between a mountain bike and a hybrid bike.

Before you purchase a bike it’s important to truly understand the differences between a mountain bike and a hybrid bike. Each bike offers unique benefits for specific types of riding. Be sure to understand both options so you can buy the bike that most fits your riding style.

Wheel width is one of the biggest differences between mountain bike wheels and hybrid wheels. The standard mountain bike wheel thickness is 26 inches. That size is mostly reserved for kids bikes, dirt jumping and free riding. Think 29 inch wheels (also known as 29ers) are quickly becoming more popular. And the 27.5 inch wheel (Also know as a 650b) is the new standard wheel size for mountain bikes and is the most commonly used today.

In comparison the standard hybrid bike uses a 700c wheel is measured from where the bead or inner edge of the tire meets the rim. There is some confusion as to the exact measurement for the 700c wheel. The important difference is that the Hybrid wheel is thinner than the average mountain bike wheel. Thinner wheels means faster are road and hard packed surfaces and slower on rough mountain terrain.

The recommended tire pressure differs slightly for mountain bikes and hybrid bikes. It’s important to have the right tire pressure for the terrain you will be riding.

Here’s a handy chart that goes over the recommended tire pressure (psi) for mountain and hybrid bikes. Keep in mind you would want to keep your psi lower on a hybrid bike if you are riding on rougher trails.

Hybrid bikes do not offer a suspension system. Which makes sense since they aren’t really designed to do heavy trail riding on rocky terrain. If you do take your hybrid bike onto rougher areas be sure to where padded pants and be prepared for some saddle soreness after the ride.

The entry level mountain bike which normally starts out at about $300 are know as hardtails. The is the front only suspension system. This is a great option if you are just starting out and don’t want to invest a ton of money. These bikes can also get very pricey depending on the components you add to the bike. If you plan on doing a lot of down hill riding you would want to consider moving up to a full suspension bike.

A new full suspension bike start at about $1,500 brand new. The extra cost is worth the purchase if you are planning on doing a lot of mountain riding. They are also more comfortable than there hardtail counterparts.

The average weight for a hybrid bike is 24 – 28 pounds. The lighter weight will allow you to move faster on streets. It’s one of the reasons that hybrid bikes are commonly used as commuter bikes.

In comparison the average weight of a mountain bike is 30 pounds. Slightly higher and most often has a heavier more durable frame than the hybrid bike. The extra components in the suspension system are heavy and a big part of this additional weight.

How To Pick Which Style Bike Is Right For You?

If you are in the market to purchase a new bike and deciding between a mountain bike and a hybrid bike you will want to consider a few important factors.

Pitfalls of Using a Mountain Bike on Hybrid Terrain

Pitfalls of Using a Hybrid Bike on Mountain Terrain