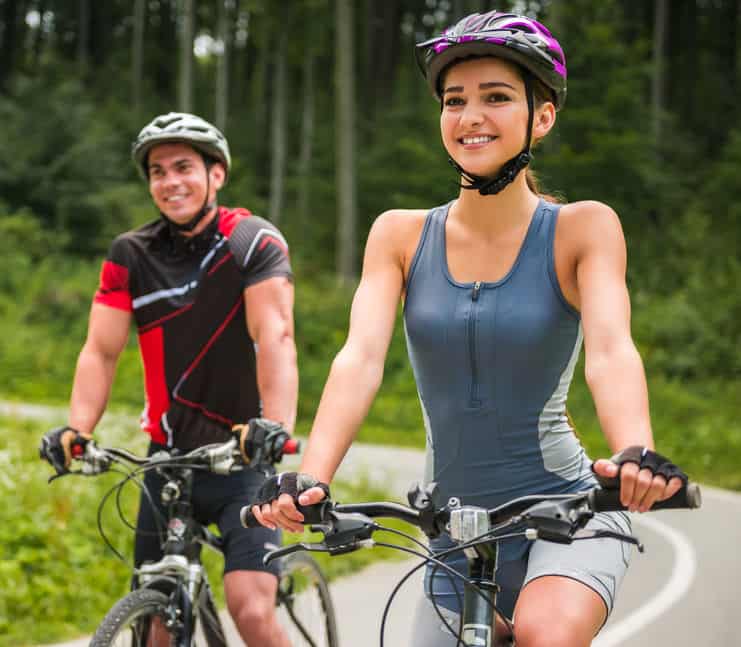 Perhaps you are looking into getting a bike, have discovered that there are some major differences in road bikes and ones that are made for mountain biking, and are now wondering which one would be the safer option to go with.

There are a lot of different factors that make both options more dangerous than the other in some ways and safer in others. Some of this will depend on the area you live in and other details, so only you can make the final decision if you would be safer if you choose to bike on a road or mountain bike on a cross country trail.

What Factors Make A Difference In Which One Is Safer?

The number of blind spots where the drivers of these vehicles might not be likely to see you is also a huge factor that affects how safe biking on the road is. Another thing to think about along these lines is how many other bikers are there around you?

When there are a number of other people out on the roads on their bikes, drivers tend to be more aware that they are there and know to keep an eye out for them. On the other hand, if you are practically the only one, then the drivers may not notice you as well since they will not even think to look for you.

Drivers will also have a hard time noticing you if you are biking at around either dusk or dawn, so the time of day that you want to bike during is also something that you should consider if you are riding on the road. This is not something that really matters on the trail though.

When it comes to mountain biking, just as you should consider the vehicles on the road, you need to consider what the trails are like near you that you will be riding. If you only have a few trails that are all pretty tame with maybe one difficult trail that you can work up to if you want to, then mountain biking can be pretty safe.

On the other hand, there are also mountain biking trails that are pretty much on the side of a cliff or which go really steeply down the side of a mountain – or both – and these trails can certainly be dangerous for a number of different reasons.

On the trail there are very few things that move apart from other people on their bikes or hikers, so if you were to collide with something it will most likely be something that is either stationary or around your own size and weight. Should you hit the ground, the worst thing that could run over or hit you after that would be another biker who was too close behind you if they cannot stop quickly enough.

Compare that to on the road where there are a lot of vehicles which are moving around. If you collide with something here then it is most likely to be a car that is much bigger and harder than you are, and should something go over you after you hit the ground… well, you probably don’t want to even think about what might happen in that case!

All in all, as a generalization it is almost twice as common to have accidents when you are mountain biking, however when you do have an accident on the road it is likely to result in injuries that are twice as bad on average. Which one is “more dangerous” is entirely a matter of opinion, since some people would much rather endure twice as many minor injuries instead of half as many which are more severe.

Biking all by yourself on a lonely road can have another kind of danger too. If you are known to take the same road at the same time on a regular basis, then if a person intended to do you harm for whatever reason this would give them the perfect opportunity to do so. For this reason kids and young girls in particular should never bike on the road by themselves, and if they absolutely have to do so they should pick different routes as often as possible.

While riding on a cross country trail on a mountain bike will be a lot safer in terms of the people – since there aren’t really any – mountain biking does have somewhat the same problem sometimes, just in a slightly different context. This is because if you are on a trail near a national reserve or some other large stretch of forest, you might get to see some of the wildlife.

Catching a glimpse of deer and other things like that can be great – assuming that they are to the side of the trail instead of on it and you can look at them without getting distracted and crashing into something. However, when it comes to other wildlife such as bears, cougars, wolfs, or other similar animals, these are ones that you probably don’t want to see on the trail. While it is very rare for any of these to interfere with mountain bikers, it is still a possibility.

Another thing to consider is the fact that riding on the road is very simple, basically all you need to know is how to go straight and how to do turns. This means that you are less likely to crash or fall over due to making a mistake. However, this is what also means that when you do end up having a crash it is likely to be something that is not your fault and is more likely to be the fault of a vehicle.

When you are mountain biking there is a whole lot more to it than that, with technical features, jumps, rock gardens, and all kinds of things that you have to learn how to navigate on your bike. If you do these things wrong you are almost bound to fall over or crash, depending on your rate of speed.

Finally, another factor that you should take into consideration is what happens when you do get hurt and you are by yourself. If you are on a road in a public area then you are likely not too far away from a hospital and medical attention. Even if you are on a lonely road you will not have to wait too long most of the time and you can hope to draw attention to yourself by yelling for help if you are not unconscious.

Out on the trail there is much more of a spectrum to consider if you get hurt while you are by yourself. With the more popular trails that a lot of people ride every day, you are likely to get noticed fast. However there are other trails that only a few people ride and that will take you a lot longer to be found. There is also the fact that it will take you much longer to be able to get to the hospital even when you are found, with airlifts sometimes being done for the really remote trails.

There are a few more factors than those to consider, such as whether you are a man or a woman taking up moiuntain biking, your age, and a few other things, but those are the biggest and most important things that go into the dangers of each. Finally, something that will affect your safety no matter which place you are riding is the amount of protective gear you are wearing.