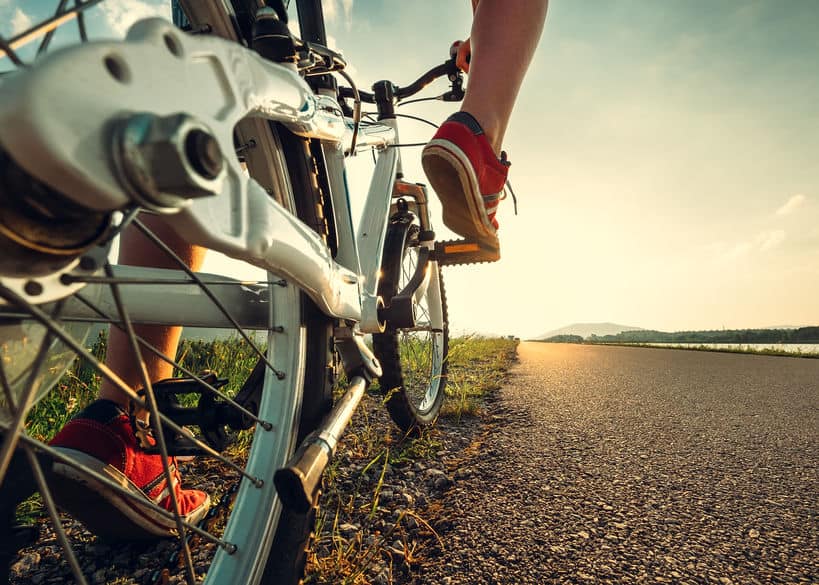 The good news is that if you have a bike with hydraulic disc brakes the need to bleed the brakes is once every three to five years. If you find that your brakes need to be bleed more often, there is most likely something wrong with your brake system.

Nearly all mountain bikes now use disc brakes. There are two types of disc brakes:

Advantage of the hydraulic disc brakes:

The hydraulic system offers more power and control when it comes to the actual braking process.

Disadvantages of the hydraulic disc brakes:

Hydraulic brake systems have to be professionally fitted.

The smallest air bubble in the system could cause the lever to lock. Removing the air is called “bleeding” and it must be done with precision.

But don’t worry you can bleed your brakes, with precision. The need to bleed the brakes is when air gets in the system and the lever locks.

How Do I know If I Have Air Inside My Brake?

But don’t worry, you can remedy the problem by bleeding the brakes. The caveat is hydraulic brakes seldom need bleeding. The air getting inside the brake is a worst-case scenario. But if you have to bleed your brakes, follow these steps:

First you will need some supplies: an 8mm wrench (preferably ring ended); a 26mm wrench or an adjustable wrench; clean rags; small length of tubing or a bleed kit; the correct brake fluid (some use DOT and some use mineral oil)

On brake fluid: some mountain bikes use DOT fluid and some use mineral oil. You should only use the fluid your brakes were designed to use. Do not fluctuate. Do not improvise. Intermingling the fluid will cause more problems than simple having air in your brakes.

Remove the wheel and brake pads. Make sure you do not touch the pad surface with your fingers as this will contaminate them.

Repeat this process until no more bubbles come out. Make sure that the fluid in the reservoir does not drop too low. Keep topping it up.

Replacing the master cylinder cap is the next step. This is a bit tricky.

It sounds like a lot but that is only because the process requires precision, which you are more than capable of doing. The good news is that according to Bicycles Stack Exchange, “unless you open the system, the oil stays good for up to seven years. The “regular bleeding” that every hydraulic brake need should be at most every three to five years, unless some problem happens.”

This simply means you will probably only have to bleed the brakes on your mountain bike once maybe twice. Although a mountain bike like a car’s life span should be viewed in terms of mileage, on average a good mountain bike will last a decade or longer. This is based on wear and tear and not your desire to trade up or down.

How often you will need to bleed the brakes on your mountain bike will also depend on the type of brakes you have. If you have the mechanical disc brakes, you will never need to bleed them. You will only need to replace the cables and their housings when there is a problem.

Those who have settled for a cheaper hydraulic disc brakes may find that they need to bleed their brakes more often. With a bleeding kit costing around $30 each time this could get expensive.